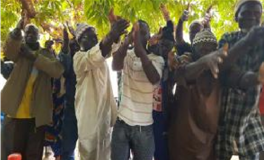 With funding from Global Affairs Canada, in a consortium of NGOS, led by Plan International, Africare and now PanAfricare implemented the project Strengthening Health Outcomes for Women (SHOW), The project seeks to contribute to the reduction of maternal and infant mortality in the targeted regions among vulnerable and marginalized women, specifically adolescent girls, and their children. This focused on three components:  Increasing demand for Maternal, Neonatal and Child Health (MNCH) services, increasing access to MNCH services and the accountability component.  To achieve this, one of the strategies focused on establishing husband schools.

All too often in this region, men or husbands are not actively engaged as an important partner in decision making on health issues concerning their spouses and children yet are also decision makers on allocation of resources for instance in relation to health needs. Additionally, a majority of the cultural beliefs, taboos and norms that negatively impact child and maternal health mostly tend to favor or have no impact on men’s health. For instance, when there is food scarcity for a family, males are favored instead of pregnant/lactating mothers who have high nutritional needs. Changing the knowledge and attitudes of men toward health and nutrition practices, is as important as changing the knowledge and attitudes of women. If men are properly provided information on the health and nutritional needs of pregnant, lactating females, children and women in general, and the role they ought to jointly play in ensuring, they

It is for this reason we target men in our efforts to achieve this goal through husband schools or as referred to in French “Ecole des Maris (EdM)”. This approach was developed by UNFPA and has been adopted in many forms by many organizations. EdMs seek to foster a non-judgmental environment of learning and discussion amongst model husbands in the community with the overall goal of promoting greater involvement of men in Maternal, Neonatal and Child Health MNCH at the individual and community level.

In this project, the EdMs are comprised of 15 voluntary members and one coach chosen by a community forum and supervised by an NGO staff member. EdM activities included focus groups on MNCH issues, home visits to men, community talks followed by film screenings. In implementation of EdM, we identify and gather model husbands of diverse age groups to engage their peers in promoting maternal and neonatal health. It creates a space within the community for information exchange and analysis on the socio-economic situation of the community and the impact it has on their household wellbeing.

Overall, the EdMs are highly effective at changing men’s attitudes and behavior regarding MNCH. 3 keys outcomes are observed as a result of this activities:

This approach supported the project’s objective of increasing demand for health services.